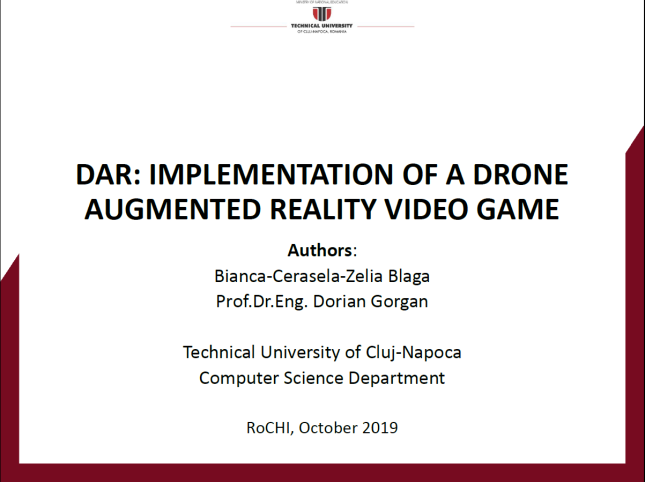 Abstract: Augmented reality video games combine the elements of a virtual application with those of the real world. With the recent advances in technology, this type of digital content is easily available to users. The player experience is enhanced by bringing the virtual experience to the world around us, and new interaction techniques emerge. We propose a video game in which the user controls a virtual drone which interacts with objects situated in a real environment. We present the development methodology that we followed in order to bring this project to life, from the early stages of topic selection to implementation details, and finally to the evaluation step.

Weakly supervised learning methods have brought improvements to the semantic segmentation problem. By simplifying the labeling work, more attention is given to the network architecture. In the paper entitled “Weaklier Supervised Semantic Segmentation With Only One Image Level Annotation per Category”, the authros propose a three-stage semantic segmentation framework that deals with image and pixel level understanding at a coarse level and goes deeper towards objects feature learning at a fine grained level.

The novelty consists of using only one sample with image level annotation per category, whose labeling form is more closer to prior conditions required by human to learn new objects. For image classification, response activation clustering (RAC) is proposed to achieve image level labeling, while multi heat map slices fusion (MSF) and saliency-edge-color-texture (SECT) based modification are utilized to generate pixel level annotations, which combine high-level semantic features and imaging prior based low-level attributes. For object common feature learning, dual-branch iterative structure is introduced. Based on conservative and radical strategies, information integration are realized iteratively, the completeness and accuracy of object region are gradually improved.

In the first stage, image level semantic information is extracted in form of response vector, and the relationship of each pair of feature dimensions is analyzed to achieve accurate image level object category annotations. Then, heat maps based on high-level semantics and low-level imaging attributes are utilized in combination to generate pixel level pseudo supervised annotations. In the first two phases, multi attention mechanism is introduced to achieve a better understanding of objects which are not salient or with small scale, as well as to mine detailed expression in images. Using a number of obtained annotations, dual branch network model is designed to learn common features of objects from different instances, more complete and accurate object regions can be obtained iteratively. Based on the methods, semantic segmentation task is implemented through a learning process which takes advantage of prior knowledge as much as possible.

Olives are an important agricultural product, therefore the industry is interested in detecting their external defects. The researchers Nashat Hussain Hassan and Ahmed Nashat from Fayout University, Egypt, have developed an image processing method that can classify healthy or defected olive fruits. Furthermore, a series of techniques have been compared to find the most appropriate low-cost kit that can be used in a real application. 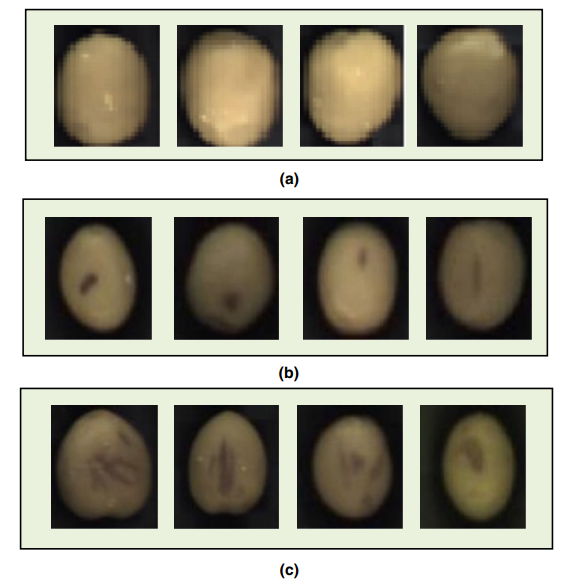 The first developed algorithm is called Texture Homogeneity Measuring Techique (T.H.M.T) and it consists of five steps. First, images are collected and then pre-processed by applying a grayscale conversion. The next step is to extract objects by segmenting the images into olives and background. The defects are obtained by scanning the image horizontally and pixels are labeled accordingly with ‘0’ for a healthy area and ‘1’ if a defect is present.

The second proposed method is called Special Image Convolution Algorithm (S.I.C.A.) and it is similar to edge detection, but with specific kernels of 7×7 which are applied both horizontally and vertically. The results are then thresholded based on the values observed by the authors.

Neutron stars — the compressed remains of massive stars gone supernova — are the densest “normal” objects in the known universe. (Black holes are technically denser, but far from normal.) Just a single sugar-cube worth of neutron-star material would weigh 100 million tons here on Earth, or about the same as the entire human population. Though astronomers and physicists have studied and marveled at these objects for decades, many mysteries remain about the nature of their interiors: Do crushed neutrons become “superfluid” and flow freely? Do they breakdown into a soup of subatomic quarks or other exotic particles? What is the tipping point when gravity wins out over matter and forms a black hole?

A team of astronomers using the National Science Foundation’s (NSF) Green Bank Telescope (GBT) has brought us closer to finding the answers. The researchers, members of the NANOGrav Physics Frontiers Center, discovered that a rapidly rotating millisecond pulsar, called J0740+6620, is the most massive neutron star ever measured, packing 2.17 times the mass of our Sun into a sphere only 30 kilometers across. This measurement approaches the limits of how massive and compact a single object can become without crushing itself down into a black hole. Recent work involving gravitational waves observed from colliding neutron stars by LIGO suggests that 2.17 solar masses might be very near that limit.

Pulsars get their name because of the twin beams of radio waves they emit from their magnetic poles. These beams sweep across space in a lighthouse-like fashion. Some rotate hundreds of times each second. Since pulsars spin with such phenomenal speed and regularity, astronomers can use them as the cosmic equivalent of atomic clocks. Such precise timekeeping helps astronomers study the nature of spacetime, measure the masses of stellar objects, and improve their understanding of general relativity.

As the ticking pulsar passes behind its white dwarf companion, there is a subtle (on the order of 10 millionths of a second) delay in the arrival time of the signals. This phenomenon is known as “Shapiro Delay.” In essence, gravity from the white dwarf star slightly warps the space surrounding it, in accordance with Einstein’s general theory of relativity. This warping means the pulses from the rotating neutron star have to travel just a little bit farther as they wend their way around the distortions of spacetime caused by the white dwarf.