Japanese researchers describe a new implantable device no bigger than the width of a coin that can be used to control brain patterns. The device, which can be read about in AIP Advances, converts infrared light into blue light to control neural activity and is both the smallest and lightest wireless optical biodevice to be reported. The miniaturization of implantable devices has been hindered by a dependency on electromagnetics. In such devices, both the voltage and the current decrease with a reduction in size, thus limiting the power. On the other hand, in devices that depend on photovoltaics, voltage remains unchanged as size is reduced. 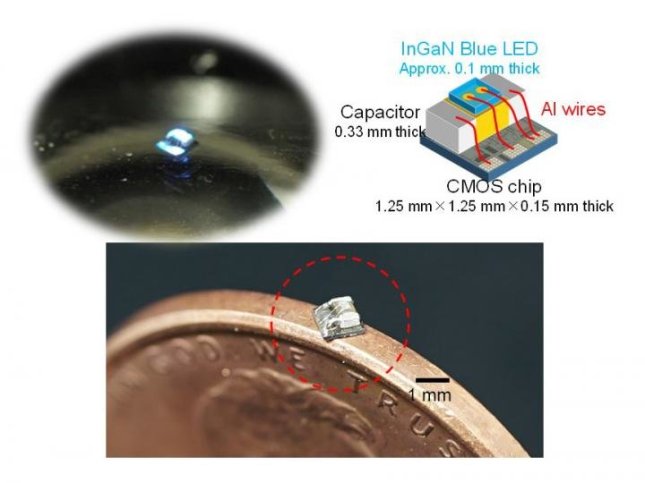 The device includes an InGan LED chip, which causes the device to emit blue light. A more distinguishing feature of the device, however, is that it can be activated with infrared light. Infrared is used in many light therapies, because it can penetrate deep in the body, whereas blue light cannot go much deeper than the surface. Therefore, the device can be implanted several centimeters into the body. At just 1 mm3 and 2.3 mg, the volume and weight of the device are almost one order of magnitude than any other reported device, leading Tokuda to call it “the world’s smallest wireless optical neural stimulator.”