Whether they’re swooping in to deliver packages or spotting victims in disaster zones, swarms of flying robots could have a range of important applications in the future, a new study found. The robots can transition from driving to flying without colliding with each other and could offer benefits beyond the traditional flying-car concepts of sci-fi lore, the study said. 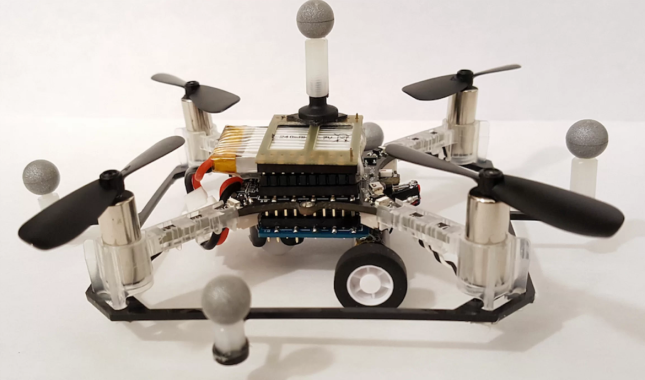 The ability to both fly and walk is common in nature. For instance, many birds, insects and other animals can do both. Robots with similar versatility could fly over impediments on the ground or drive under overhead obstacles. But currently, robots that are good at one mode of transportation are usually bad at others, study lead author Brandon Araki, a roboticist at the Massachusetts Institute of Technology’s Computer Science and Artificial Intelligence Laboratory, and his colleagues said in their new study. The researchers previously developed a robot named the “flying monkey” that could run and fly, as well as grasp items. However, the researchers had to program the paths the flying monkey would take; in other words, it could not find safe routes by itself.

Now, these scientists have developed flying cars that can both fly and drive through a simulated city-like setting that has parking spots, landing pads and no-fly zones. Moreover, these drones can move autonomously without colliding with each other, the researchers said. “Our vehicles can find their own safe paths,” Araki told Live Science. The researchers took eight four-rotor “quadcopter” drones and put two small motors with wheels on the bottom of each drone, to make them capable of driving. In simulations, the robots could fly for about 295 feet (90 meters) or drive for 826 feet (252 meters) before their batteries ran out.