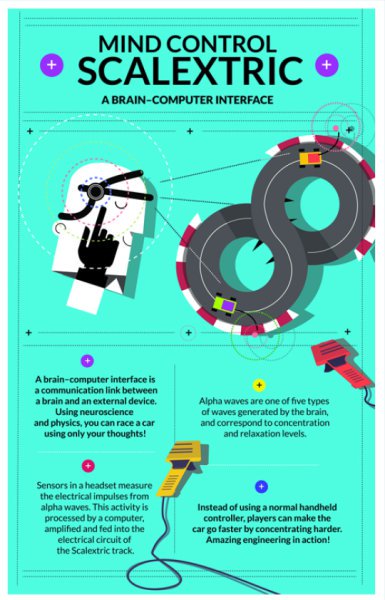 The next generation of toys could be controlled by the power of the mind, thanks to new research.

Led by Professor Christopher James, Director of Warwick Engineering in Biomedicine at the School of Engineering, technology has been developed which allows electronic devices to be activated using electrical impulses from brain waves, by connecting our thoughts to computerised systems. Some of the most popular toys on children’s lists to Santa — such as remote-controlled cars and helicopters, toy robots and Scalextric racing sets — could all be controlled via a headset, using ‘the power of thought’. This could be based on levels of concentration — thinking of your favourite colour or stroking your dog, for example.

Instead of a hand-held controller, a headset is used to create a brain-computer interface — a communication link between the human brain and the computerised device. Sensors in the headset measure the electrical impulses from brain at various different frequencies — each frequency can be somewhat controlled, under special circumstances. This activity is then processed by a computer, amplified and fed into the electrical circuit of the electronic toy.